Provider-sponsored health plans (PSHPs) aren’t new. Providers have been dabbling in the insurance business for decades. They also aren’t uncommon—more than 50% of health plans in the market are PSHPs, and some 36.3 million people in the US participate in a health plan that’s part of a health system.

What is unusual is for PSHPs to live up to their potential.

The most successful and best-known PSHPs—think Geisinger, Intermountain, Kaiser Permanente—prove the model can work. But many other PSHPs are stymied by:

PSHPs rarely see a quick return on their investments, and many healthcare organizations walk away from their insurance products after several years of hemorrhaging money. But the benefits of successfully building one—specifically, delivering high-quality care while keeping costs low, retaining a greater portion of patient premiums, enhancing the consumer experience, and minimizing network leakage—are enticing enough that health systems keep looking for ways to integrate the payer component into their organizations.

Peter Pattinson, Principal, and Jacob Konitzer, Senior Manager, are part of ECG’s Managed Care Services Division. Below they talk about what it takes for a PSHP to succeed, why so few do, and how COVID-19 has changed providers’ thinking on developing a health plan.

What motivates health systems to get into the insurance business?

Peter: It’s an attempt to diversify their revenue streams. Provider systems rely almost completely on patient throughput. COVID-19, with its devastating impact on the volume of elective surgeries, left numerous provider systems in dire financial straits. Those that had other sources of revenue—for instance, where providers had capitation agreements—were insulated from some of the worst consequences. So more than anything else, it’s a diversification play.

But the other component is that they can also generate more patient throughput in their facilities. The idea is that if a health system has their own plan, they can direct membership away from a competing provider system into their own system.

Jacob:To echo what Peter said, it’s a demand management tool. It’s a way for systems to ensure they can maintain or grow their position in the market in terms of throughput and rendering services. 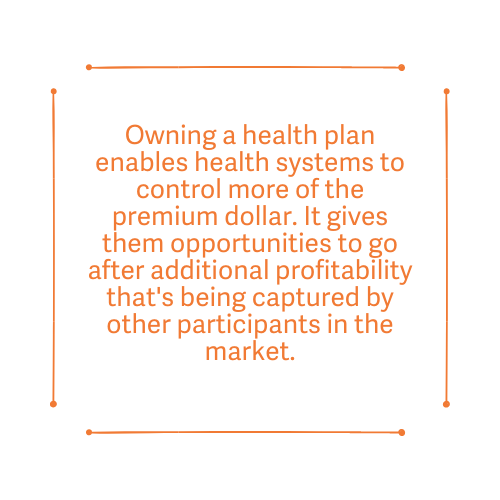 I think the number two reason is that they can control more of the premium dollar. So if you think about the totality of healthcare and healthcare expenditures, it starts at the level of the premium dollar, and then money gets divvied up to all the different participants within the industry, based on the types of services they provide, whether it’s pharmaceuticals, acute care services, physician services, etc. But a lot of these systems control the clinical services, meaning either professional or hospital services that are being provided. Getting more of that premium dollar, which happens when you start a health plan, gives the health system access to margins across all the various verticals.

And so that’s why they do it—because it gives them opportunities to go after additional profitability that’s being captured by other participants in the market.

What does an organization like this need to be successful?

Peter: For a provider system to succeed in a provider-sponsored environment, it needs to have three key components. One is scale, because if they have enough scale, then they can spread the administrative cost across a large book of business.

The second component is network reach. Plan members need to have enough network options where they can seek care. 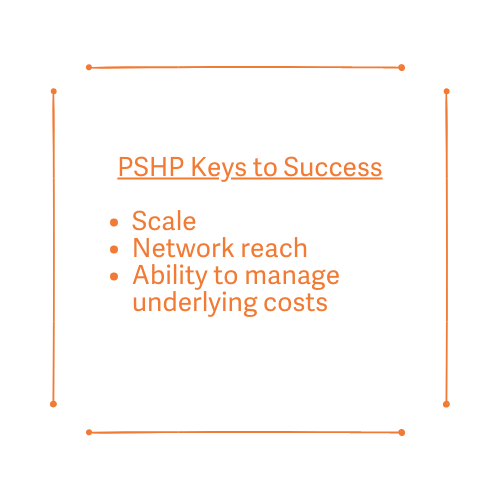 But the most important factor is the provider system’s ability to actually manage its underlying costs. If you’ve got a system that offers high-quality care and has a decent network, but its cost position is too high, then its premiums will necessarily have to be high as well—and then they’re doomed to fail.

Another common mistake is that while a PSHP may price itself close to its competitors, it doesn’t have the same breadth of network—so it doesn’t have much of a value proposition. This is even more the case if the provider is part of the network of a competing plan. In that scenario, potential purchasers would likely buy the competing plan and still have access to the provider. The PSHP can only succeed if it is priced at a significant discount to the major carriers’ products.

Jacob: I would add the ability to manage risk-adjusted total cost of care as a driver of success. PSHPs are successful when they manage the total cost of care better than their competition. If they can do that, it allows them to build scale by writing business in new markets at a loss.

Peter: And to Jacob’s point, market reach is what drives success for a PSHP. It’s the breadth of the network, the competitiveness of the product, and the ability to keep membership within the network.

A lot of PSHPs abandon their insurance products after four or five years. What are they doing wrong?

Peter: Their pricing strategy often hurts them. When a PSHP launches, quite often they think people will come to them on the basis of their brand reputation. So they price their product 20% above market. Think about that from the perspective of an employer: you’ve got a provider coming to you saying, “We can give you a plan, but it’s 20% more expensive than everybody else’s, plus it’s a narrow network because it’s a provider-sponsored plan.” And again, the provider may be part of a competing network, which gives members a less expensive means to access their services. 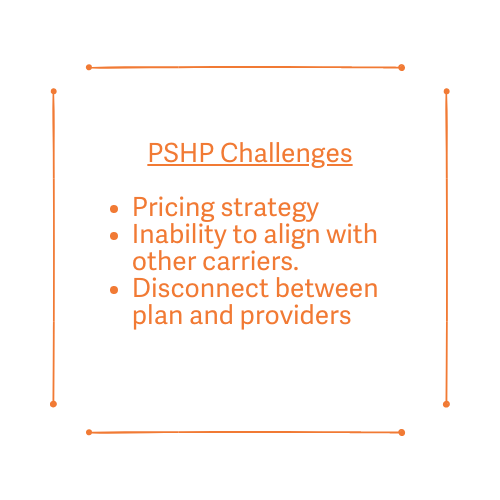 The PSHPs often don’t know what the competitive price point is. And this comes to a fundamental issue with a lot of the provider-sponsored plans: they don’t have the plan capabilities in terms of actuarial personnel. And that’s the first thing a major plan has—strong actuaries who understand the market.

And the last, and probably the most important factor that undermines the success with a PSHP, is the disconnect that you have between a plan and a provider. A provider is always looking for throughput and revenue. They’re always thinking in terms of, “Can I use this plan to get more patients into my hospital?” A health plan has a different mentality altogether. It’s trying to reduce utilization and try to keep people out of hospital.

Jacob: I think it boils down to that disconnect, and how you balance control. Often providers have too much control over the enterprise and invest in capabilities that do not generate financial returns. Additionally, they often think they can use the insurer to generate more lucrative reimbursement for their services, but then they can’t compete from a premium perspective in the market. So in a competitive market, price is even more important. It’s hard for provider-sponsored plans to grow, and if you’re not growing you’re not going to make it.

Obviously some do succeed. When the model works, what are the advantages of a PSHP?

Jacob: It’s their ability to use data to manage costs, ensure patients are getting the right care in the right setting, and provide a more seamless experience. It’s the blending of care and coverage, with data that payers have. That enables a PSHP to develop capabilities to influence total cost of care, such as sharing actionable information at the time of intervention about a person’s underlying health conditions that can reduce or eliminate avoidable or redundant care, and keeping people out of higher-cost settings.

If systems recognize they can do something in a provider office or a hospital outpatient setting or ASC rather than in a hospital inpatient setting, there’s a lower price point associated with each one of those. And so the provider-sponsored plans are successful in managing where care is delivered, which makes them more competitive in terms of total cost.

Peter: And I’d add to that—the advantage for a provider system that is truly integrated is they can channel patients to stay in their network and not lose them to other competitors.

Jacob: I think it’s also the ability to share risk between both entities. Say a payer pushes a cap or a budget down onto the providers, and the providers are managing costs up to that budget. They’re managing to a predictable number, and that in and of itself can promote sustainable growth. It makes it easier to stay competitive and stay relevant when you have those controls in place.

Assess Your Organization’s Readiness for Investing in a Health Plan.