But a lot has to happen before a single case can be scheduled. “You need to get all your ‘what-ifs’ out of the way,” says Catherine Ruppe, RN, an associate principal with ECG. “You don’t want to do your first total joint and then realize that you don’t have high enough reimbursement in your commercial payer contracts for your implants, and you end up losing your shirt.”

Prior to her consulting work, Catherine was the executive director of ASC Operations at a large, multispecialty surgical practice with 22 ASCs in the Pacific Northwest, where she collaborated with executives and provided leadership to the directors. Catherine explains what’s involved with adding a total joint service line to an ASC.

Adding any new service line to an ASC takes an incredible amount of forethought. But planning for a total joint program is downright overwhelming, Catherine says, given all of its moving parts. “When you first think about starting a total joint program, it can be daunting,” Catherine says. “Take your time and think about everything—all the people, all the things that need to be involved, and make sure everybody’s on the same page.”

Getting everybody on the same page may be one of the first challenges. “You’re going to meet resistance from staff, potentially even some surgeons,” Catherine says. Her organization established a total joint program in 2016, and she recalls that “some surgeons were on board, others were not, and it took convincing on the staff’s part because a lot of people had left the inpatient arena” in favor of a less taxing schedule and a desire to work on less intricate cases.

There are external stakeholders to consider as well. ASC leaders need to work with payers to ensure favorable reimbursement for total joint cases in the outpatient setting. It’s important to evaluate payer contracts, determine the implant costs, and assess any high-cost disposables and supplies (especially if robotics are involved). With total joints, the payer mix can often be 50% Medicare, so any potential loss on these cases should be factored into the reimbursement targets with commercial payers.

ASCs also need to negotiate with vendors on the cost of implants and equipment. “We worked with our vendors to streamline the amount of instrumentation we needed to bring to the surgery center,“ Catherine says. Again, the Medicare population needs to be factored into the discussion with vendors. When Medicare fixed rates don’t cover the cost of the implant, ask the vendor to partner with the ASC on pricing and work on discounts to lower the cost. 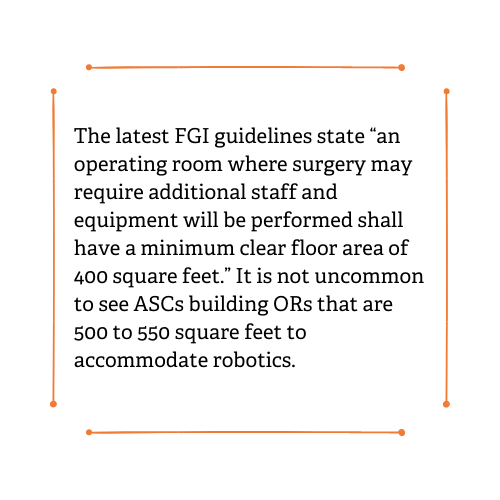 Space is also a concern. An ASC’s ORs need to be large enough to accommodate the staff and the equipment needed for a joint procedure. But the size of the OR is only one consideration. Catherine explains that while the typical postoperative period in ASC is about two hours, joint patients might be there for six to eight hours after their surgery. Those patients “have to get up and ambulate. At our facilities, we had to think about space for those patients to walk in our surgery center.”

And don’t forget about the little things. Longer postoperative stays also means keeping patients comfortable for longer periods. “We encouraged them to bring iPads if they had them. We also had a TV on a cart with a DVD player and a couple of movies, but we told patients they could bring a DVD or use their Netflix account.” 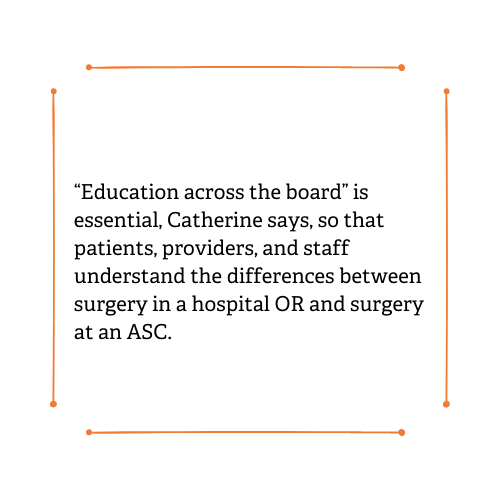 Education is a theme Catherine returns to frequently when discussing total joints at ASCs. “Education across the board” is essential, she says, so that patients, providers, and staff understand the differences between surgery in a hospital OR and surgery at an ASC. Patients, in particular, need to feel comfortable with the environment and know that safety is a priority.

Catherine noted that she and her team encountered “a lot of apprehension” from patients when their surgeon would schedule them for a joint procedure in an ASC. “They would go home and say, ‘I’m going to have it done in an outpatient surgery area,’ and their friends and family would be like, ‘Oh no you’re not. That’s too dangerous,’” she says. “There was this perception of the Wild West, and that we were doing surgery out in the back yard instead of in a fully functioning ASC.”

Performing a joint procedure at an ASC may cost less than doing it at a hospital, but that’s not because the ASC is skimping on patient safety measures or quality of care. “I don’t think everybody in the public understands that many ASCs are licensed, accredited, and Medicare certified,” Catherine says. We’re licensed by our states and accredited by the same bodies that accredit the hospital system. We have to follow many of the same rules that the hospitals do for patient safety.”

Physicians also need to learn that operating in an ASC is different, and they’ll have to make some adjustments. “They aren’t going to change their surgical approach or protocol, but they have to think more clearly about pre-op preparation, post-op planning, pain control, things like that,” Catherine says. “Normally they do their surgery and don’t see the patient until maybe the next morning. But in the surgery center, they’re coming to see them before they leave the facility, within a few hours.” 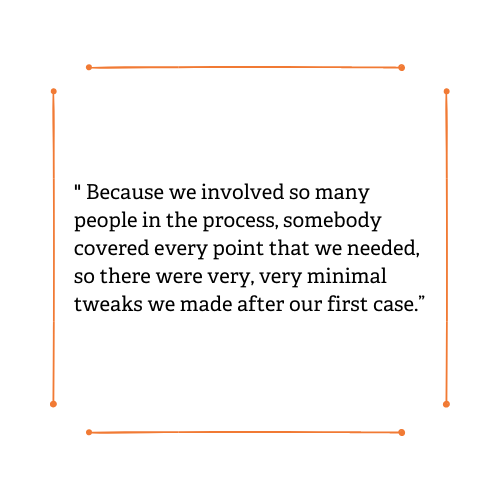 Adding a total joint service line will affect everyone at the ASC—surgeons, staff, even non-orthopedic surgeons, whose schedules may be affected by the change. So it’s best to include everyone in the preparation.

“Involve everybody,” Catherine says. “You never know who’s going to come up with a great idea or a new way of doing things that could potentially work. We worked the physicians to create the protocols, and we worked with staff to figure out our processes. We did a number of dry runs with using our staff members as a patient, and each time, we found, ‘oh, we forgot about that,’ or ‘we didn’t think about this.” Because we involved so many people in the process, somebody covered every point that we needed, so there were very, very minimal tweaks we made after our first case.”

“It also engaged the team very much,” she continues. “Everybody was on board. Even from the front office, the schedulers, and the check-in people, all the nursing staff, pre-op, post-op, of course the OR team, materials, SPD.”

And since everyone shares in the planning, everyone should be able to celebrate the outcome. “We made it a big day in the surgery center when we did our first case. We brought in lunch for everybody. It was the culmination of months’ worth of work, and it was just the beginning of what we’re doing, but we wanted to celebrate our successes along the way. And I think that empowering the staff to speak up, be a part of it, be engaged, is very important.”

Here’s what you need to know.